A downloadable game for Windows

Save not only one - no, save infinite worlds in this Gameboy-Style Action RPG

You enter a world, after selecting New Game and entering a 'World-Seed'.

This number determines how the world looks and plays like. Find powerful spells and mighty weapons and armors that help you bring peace to the worlds!

The goal for the hero is to retrieve 3 crystals out of the dungeons and use them to enter the Void where the Dark Master waits. Can you defeat him? Or can you defeat him more than once?

Controls can be re-configured in the options menu. Standard controls are:

I plan to add many more enemies, bosses, items and areas to the game.

Unpack the the zip-file somewhere on your drive, ensure to have reading and writing access in that location -> Run 'Mystik Adventure' as administrator to play!

So, funny story. I read the comments, saw that luck actually boosts your chance for chests AND damage with daggers, and I immediately thought, "yeah, I'm probably gonna go heavy luck and focus on daggers."

I found a weapon shop early on, maybe the fifth or tenth screen I explored, and it had a Bronze Dagger (Att 3). Once I saw the speed and range of daggers, I was SET. I never used another weapon, I never used any magic except cure, and I never spent a single build point on anything but luck the entire game. I finished at level 16.

Here's what's funny: I NEVER FOUND ANOTHER DAGGER, not in a chest, not in a shop, nothing. You might say ... I didn't have any luck finding daggers. I used that Att 3 Bronze Dagger all the way through the final boss, and I dealt 14 damage per hit to the final boss. I even tried switching to the Rune Sword++ (Att 25) that I found IN the void, but I dealt only 12 damage with it, because I never put any points into Strength.

That said, I had a lot of fun, I found this ironic experience to be rather humorous, and I'm totally gonna try again on another map seed. A "New Game +" feature might be interesting for this game.

Hi! Thank you for this little story, that is indeed hilarious :D This is what drives me as a gamedev, to see people play and experience stuff like this.

That being said, I plan to expand the game further in the future. It was done (the way it is now) pretty fast and I wasn't sure people would like it.

So, I plan on adding better map generation, more enemies, bosses, items, spells and some side quests (with optional dungeons).

Have a good day,

Fun little game. On keybord the controls are not perfect, but its a free game, so I should shut my mouth.

Thank you for the feedback!

There's one room on the map leading South where you haven't been by the looks of it.

WOW, I am stupid

There may be bugs with the generation but I didn't see any until now. Please let me know whenever you find any.

I just played and finished the first seed world. This was fun, and quite long too. So much to do too! Lots of variety in monsters too.

I didn't understand how most of the weapons or magic work so in the end I just used an axe and lots of strength points (and a heal spell) to kill everything.

awesome, thank you for the feedback.

I'm glad you enjoyed the game :)

Some tipps for weapons:

- Daggers get stronger the higher your luck value is

- Rods get more powerful the higher your Magic power is. They also can be charged by holding the attack button, to release a spell (limited use, see the nr in the menu on the icon)

thank you very much, again :)

There are some secret mechanics I wanted to share with you:

- Daggers are special weapons. Their damage will increase the higher your luck value is

- (Most) Magic Rods can be charged by holding the weapon button

- The higher your Spirit value, the higher is the healing power of cure and the attack power of Light and Dark magic.

Just finished the game.  Had a lot of fun with it, but I've mostly got a few nitpicks:

-Boss music would be good for hyping up a fight. Although if you're going for a Zelda 1-vibe where there wasn't boss music, ignore this.

-Adding secrets to worlds (rooms, caves, islands, etc.) would make exploring so much more engaging. Games like Zelda give you a reason to stop and search for small details, and that would help this game since I spent most of my time beelining to the next sanctuary with an occasional pitstop at a shop. The sanctuaries, while still lacking secrets, are a little better about exploration since they have rooms with chests that contain potentally awesome loot, so there's more incentive to look around.

-Adding sprites for buildngs, ruins, statues, shops, etc. as well as some NPCs (fellow adventurers, travelling merchants, etc.) could give this game a more "lived-in" feel. Not saying whole towns need to be added (the game seems to be paced out so that players will hit level 15/16 by the end, and having a group of non-hostile screens could slightly mess with this pacing). Right now, it just feels like I saved a random stretch of land instead of an actual kingdom.

-The only major issue I noticed was that Ice Crush is extremely OP. It's not as useful against normal enemies, but every boss I've fought, including the last one, can be completely destroyed by this spell, especially with magic-enhancing gear. But maybe this was a rare item that's intended to be OP and I just got lucky?

Regardless, this was a good way to kill an hour. I'm a sucker for games where you work towards grabbing increasingly more powerful loot, so this was right up my alley. I wish you and this game the best.

Thank you very much for your feedback!

First off, I want to mention, although the game fully playable / completable, I'm not yet finished with adding content and improving things. I mainly wanted to gather feedback with this build.

As you mentioned, I will work towards making the game more lively, more buildings and different locations will be added in the future. I intend to make optional mini dungeons with puzzles like in Zelda games, also making the overworld more restrictive. For example, you need an item to unlock a certain area on the map and so on.

I too noticed you can stun lock enemies and some weapons hit twice, but I kept it for now. Will think about making enemies more dangerous.

To be honest, I didn't test all spells on every boss, so yeah, some might be OP. Also keeping that in mind.

Hope you will enjoy the game when I released new content updates!

Just fully finished my first seed.  It was pretty good!  Two of my dungeons spawned right next to each other so most of the game was a chill hack and slash while finishing the map

Awesome! Thank you for playing!

I'll crank up the world generation in future updates. Wanted to keep it simple, but it's too simple most of the time.

It would be nice to see games to not only emulates the aesthetic of the past generations games, but it will be also cool to see working on the intended hardware. I had a blast with a lot of those retro games for the nes, genesis, snes and so on.

Looks nice, I would love to play it on my GB with a flashcard.

I absolutely agree with you.

Planning to release some games that can be played on actual hardware!

That's totally rad. I enjoy when devs push themselves and go for the extra mile.
I am working on a beat em up for windows and linux, and I really, REALLY want to make it for Genesis (not sure how I am gonna make  500 mb into a 3-4 mb rom) but I lack the knowledge of the tools used for the task, but I will go for it eventually.

Awesome! Best of luck with that! :)

Uploaded a new version that fixes some bugs:

- Water texture seems to glitch out on some systems

- Fullscreen seems to not work properly on some systems

- Fullscreen should not be implemented with the actual fullscreen option in Monogame. Rather, it should be a windowless window that's the resolution of the primary monitor.

- While the world is generated randomly, there is very little interest in exploring it.

1. There is no actual traversal challenge. Every room has connections to all sides.

2. There are no hidden secrets in any of the rooms. I know this is meant to emulate Final Fantasy Adventure, but still.

The actual generation of the rooms itself is really nicely done tho.

Also, the fact that there's no visual guidance on where to go is also not helping this. It's basically a game of traversing every room to find the dungeons. It doesn't even have to be a UI hint. Just a stone path to the first important locations, even if suttle, would help greatly. Of course, if the overworld had a generated "maze-like" structure, like it should, it would also help in guiding the player.

The dungeons have the same issue basically. There's too much space to explore at once, with no significant points of interest in between other than the one room where to key is. I haven't finished the game yet, but I'm guessing all dungeons will follow this pattern.

The gameplay's fun tho. It's as clunky as Final Fantasy Adventure, but in a good way.

Thanks for your feedback!

I wanted to keep it as simple as possible, the generation is very basic by intention. I thought it would be in the interest of the player to open the world completely. If demanded by more players, I will add logic to the overworld, so that you can't go everywhere from the start like in some Zelda games.

There are some more bugs that will also be fixed in the next update.

Yeah, I figured that was it!

are you on a Windows System?

Nevermind i got it 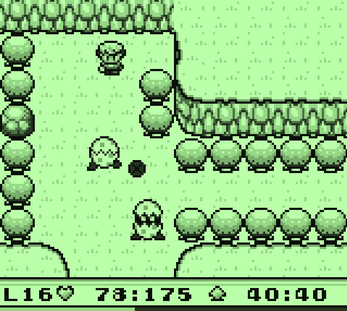 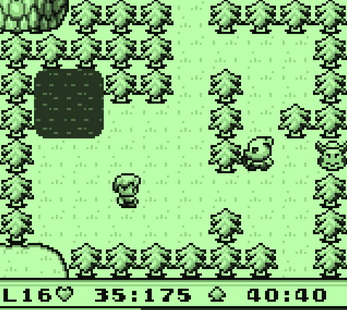 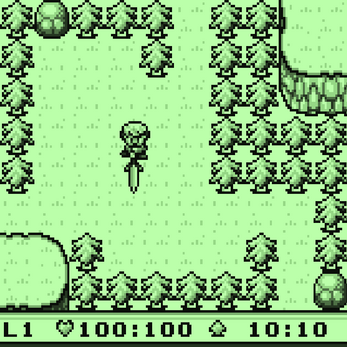 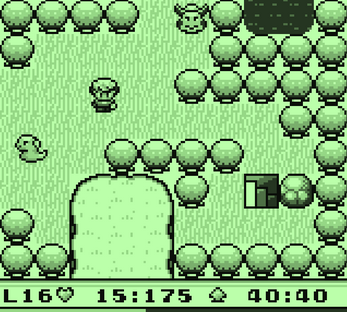 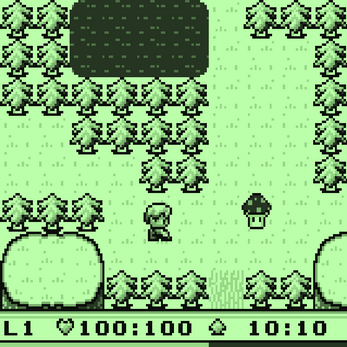 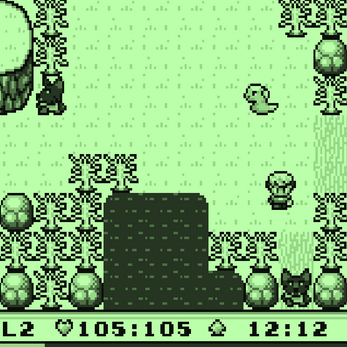 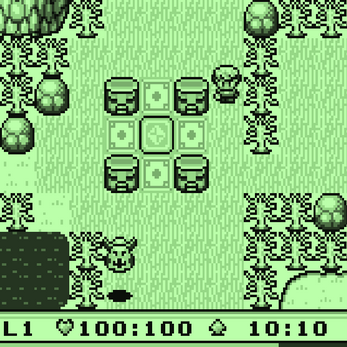 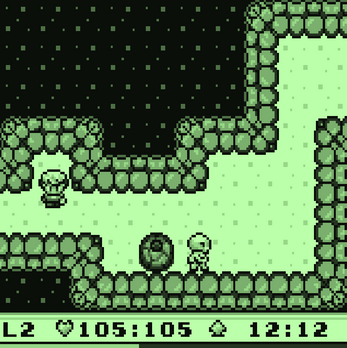